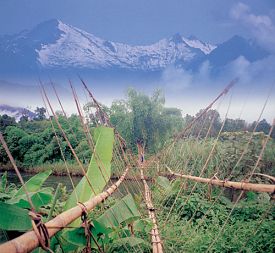 Hkakabo Razi is the highest mountain in Myanmar at 19,294 feet (5,881 metres and Myanmar was, until 1987, known as Burma.) The summit tip borders Tibet and India, also. The mountain is an extension of the Eastern Himalayas. Although low in comparison with Himalayan giants, Hkakabo Razi is perennially snow capped. Hkakabo Razi lies in the Hkakabo Razi protected area, established in 1996 which covers over 3812 square kilometres. Before 1993 this area was not accessable to foreigners. The first recorded attempt at the peak was made in 1995 by Takashai Ozaki, from Japan. He failed due to persistent bad weather. A year later he returned, and this time succeeded. Nyama Gyaltsen from Myanmar made it too. Like the main Himalayas, these mountains are heavily affected by the monsoon. Hkakabo Razi is certainly not a walk up. Huge cliffs with D+ climbing, hanging glaciers with large crevasses, and cornices, makes it a mountain not to be toyed with. The approach to the mountain is a major obstacle: there are unstable bridges, over huge gorges. For the most part, journeys are made on foot along footpaths that hug the mountainside and wind through dense jungle undergrowth. Ozaki demands four weeks walking to approach the base camp above 3000m/10000ft.

I just had to comment here. Anyone who knows anything about the world's mountains knows this peak is the most remote and hard to reach mountain in the tropical or temperate regions of the planet. There is not a ski resort for a thousand miles from it at least, maybe in India, but at least your write-up implied that. 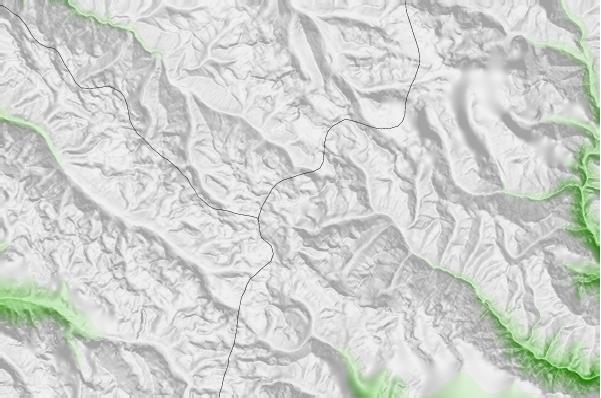