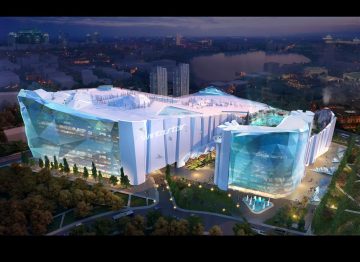 Reports from China, where the focus is on in imminent Winter Olympics and Paralympics around capital Beijing, indicate that a new “world’s largest indoor snow centre”, including an indoor Olympic standard ski run, will be completed in the country’s second city, Shanghai, before the end of 2022. Now known as WintaStar Shanghai, the spectacular project was first unveiled as Winterland Shanghai in 2015 with a price tag of 13.5 billion yuan ($2.1 billion). Located in the coastal Lingang area it is currently being billed as “the world's largest integrated indoor ski resort.” This follows claims at its launch announcement that it would contain, ”the world's longest indoor ski trail.” (Original image from 2015 announcement) The detailed stats on the snow