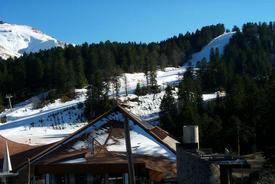 Le Lioran, in the Auvergne region of France, is a large resort with 22 lifts (8 chair lifts, 14 surface lifts) that offers skiers an impressive 684 metres (2244 feet) of vertical descent. Le Lioran has 40 pistes with a total length of 60 kilometers (38 miles). Le Lioran is best suited to beginner skiers and snowboarders but there is some terrain for both expert and intermediates. There are 140 kilometers (88 miles) of cross country ski trails at Le Lioran. The nearest airport is at Clermont Ferrand and the nearest train station to Le Lioran is at Murat. 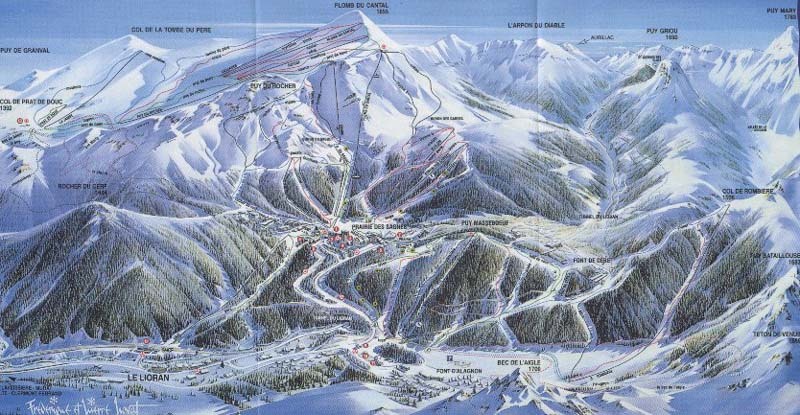 Le Lioran, the main ski resort of The Massif Cantalien, is located on a main road through the Massif Central, just a short way from the A75 highway south from Clermont Ferrand, just over an hour away by car.
Alternatively, there is a train station right in the resort. When we visited, on Easter Sunday 2008 (23rd March - about 4 weeks before the scheduled end of season here), the snow conditions were superb following two days of heavy snow and very low temperatures (-4 in the car park, -10 at the summit). Although several lifts and pistes were closed, either because of high wind or avalanche danger, we found the resort uncrowded with no queues whatsoever. Mid-week here at this time of year must be very quiet indeed and apart from during winter school holidays and maybe January weekends, I just can't imagine that the place ever gets really busy. The vast majority of skiers and snowboarders are French, most of them are relatively local and, mostly, they are in family groups of intermediate standard. The atmosphere here is much more relaxed than in the Alps. It is an intimate and very friendly place best suited for couples and families. Don't expect lively apres-ski because you will be disapointed. Off the slopes, this is the heart of a fascinating region with a vast wealth of cultural, natural and culinary diversions at hand: to visit this part of France for a whole week and just ski would be to miss the point entirely.
The location makes Le Lioran a more pleasant driving prospect from Britain than Alpine resorts: first, because it is a few hours nearer and second, because the natural route to Le Lioran is well to the west of Paris, especially if you cross the English Channel via Portsmouth or Newhaven. This makes for a quieter, much more scenic drive, with fewer and avoidable paeage. The facilities are comparable with a small to medium sized French Alpine resort and the vertical range, about 700m, is quite respectable. Twenty lifts, including a top to bottom cable car and mostly chairs besides, access about 60km of piste, roughly half of which is above the tree-line. The entire ski area is situated on the flanks and sub-summits of an extinct volcano, Plomb du Cantal (1855m). Most of the pistes are mellow greens and blues but there are a few short reds and blacks. A good skier would cover the lot and get bored in a day or two and so these skiers might be advised to split a week between here and the similar sized Mt Dore area to the north, or else visit Le Lioran for a day as part of a tour that takes in any number of mostly minor ski areas scattered about this vast plateau. For intermediates and beginners who are looking for a cheap alternative to the Alps, give Le Lioran serious consideration before booking a trip to Bulgaria. If you are driving through northern France to the Pyrenees, break your journey here if conditions are right and get some turns in. At 22 Euros per day, a lift pass is not going to break the bank. Off-piste is plainly worthwhile, though sadly for us, closed lifts meant we did not access the best of it even if we could see it. Above the tree-line there is a designated free-ride area served by the Combe chair, and in addition, there are many steep un-pisted lines off the summit area, accessed from the cable car. Maybe there is plenty here for experts after all! Down in the trees, where conditions forced us to spend most of our time, the off-piste terrain was good enough to keep us smiling for a few hours. There seem to be any number of challenging untracked runs through the forest - and unusually for France, a chance to ride through steep glades of broad-leaved trees in addition the ubiquitous conifers. There are vast ski touring options too, both on marked trails, or on the bare slopes of the Cantal Massif.
Accomodation is available in purpose built ski in - ski out appartments, together with traditional old hotels and gites in the nearby original village where the train station is. Alternatively, stay in an authentic Auvergne village along the highway - there are dozens to choose from and they include some of the prettiest villages in France. By my reckoning, that makes them the prettiest anywhere. We stayed at the excellent Hotel Les Messageries in the ancient town of Murat, 10km away. 45 Euros per night for a double room was good value, dinner from the extensive menu of local specialities was excellent quality and value and the staff were helpful and courteous. Indeed, the only thing 2 star about this hotel is the modest facade, so don't be surprised if it gets an upgrade. There are several other equally appealing options for eating and drinking in Murat and less salubrious rooms start at about 30 Euros per night for a double.
All in all, very favourable. In short, Le Lioran deserves to be much better known to non-locals: a cheap alternative to the Alps for beginners and intermediates, with considerable advantages over Eastern Europe. It is a truly outstanding destination for people who want a bit more than skiing out of their ski holidays: the kind of place where nobody should mind if the lifts are closed. The biggest drawback with Le Lioran and nearby Mount Dore is that all the skiing is below 2000m and at this latitude, that means it must often rain rather than snow at the summit, even in January. 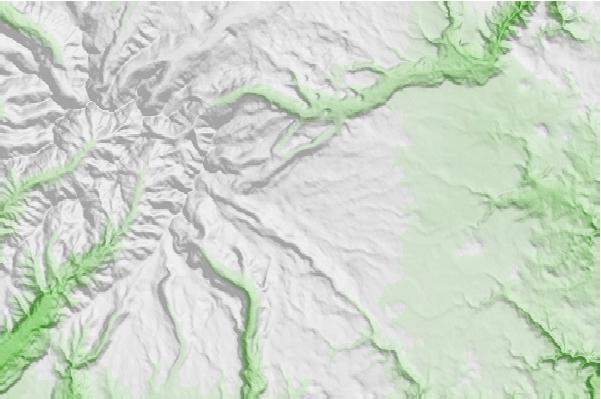